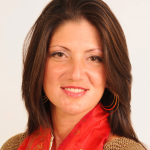 Rossana Baroncelli has dedicated her life and career to the study of the voice in all of its aspects. After graduating in theater (Stanislavski system) and modern singing, she pursues training at the Center for Rehabilitative Speech Therapy in Florence and studies Estill Voice Training™ in Milan with E. Turlà.

In 1998 Rossana meets Jo Estill, founder of EVT ™, and after being carefully evaluated, she is invited to study and collaborate with the scientist in the United States.
In 1999 she moves to California and studies English at Sonoma State University. At the request of Jo Estill, she dedicates herself to deepening the spectrographic analysis of EVT ™ data with the Kay Elemetrics Computer Speech Lab.
The result of Rossana’s work is the first complete spectrographic compilation of the proper execution of figures. The voice prints are collected in a book that the scientist adopts as the official study guide for obtaining the Estill Voice teaching license.
In 2001 Rossana obtains certification as a Course Instructor with Testing Privileges (CCI-TP), including the authorization to train and certify new EVT ™ teachers.
In Italy she teaches Estill method at the ASL (Community Public Health Office) of Ravenna, the Tuscan Regional Institute for Educational Research, the Ministry of Education, the CRSDM of Fiesole (Center for the Study and Research of Musical Didactics), and in various music, singing, and theater schools.

As a singer, in addition to performing with soul, rhythm 'n blues, and jazz bands from the start, Rossana joins the Kaspar Hauser musical company in their ongoing staging of the The Rocky Horror Show. Rossana plays the roles of Magenta and the usherette, and in A Day in the Life, she plays Sexy Sadie.

In 2000 she devotes herself to vocal experimentation of the single voice in the orchestra of contemporary music at the L. Boccherini conservatory of Lucca.

In 2001 she writes and performs an autobiographical work of experimental theater, Nascita (Birth), at Florence’s Contemporary Art Biennale. She moves to France in 2003 where Nascita is adopted by the Conservatoire National Supérieur de Musique et de Danse in Paris to demonstrate the artistic and communicative ability of using the voice as an instrument and "playing the voice without words."

In 2007 she decides to reconnect to her roots by singing Italian cover songs for the first time. She moves to Maui, Hawaii and becomes active in the art scene on the island.

On May 13, 2007 Rossana reaches what she will eventually refer to as a "peak experience" during a musical performance. The experience opens her eyes to the "metaphysics of singing" and transforms her vision of singing in public.

She returns to Italy and draws on inspiration from her Hawaiian experience to write a musical theatre piece entitled Divine Feminine. She then performs it upon request for small audiences.

From 2008 to 2011 her artistic and teaching activities come to an abrupt halt because she is diagnosed with thyroid cancer. Upset by the diagnosis and in search of answers, she begins to deeply explore the management of the voice in high-stress situations, such as those caused by the disease. This process leads Rossana to practice meditation (mostly Mindfullness) and catharsis and to study the foundations of psycho-neuro-endocrine-immunology. She investigates the connections between the various disciplines and the voice, and extends her research to the study of nonverbal communication. In order to explore these issues, she enrolls at Villaggio Globale Academy for holistic counselor in Bagni di Lucca (Tuscany) for two years. She currently attends continuing education workshops.

REBIRTH AND THE NEW AWARENESS

In 2013 she explores the validity of her theories about the connection between stress, meditation, mind control, interpersonal communication and voice, while offering workshops to travelers in a resort in Zanzibar. Meanwhile, as she forms friendships and work relationships with the local residents, she realizes the profound differences between the way the world perceives Africa from the outside and the actual reality.

In the same year, she composes and records 6 original songs.

In 2014 Rossana’s autobiographical short story about women, voice, and spirituality entitled "Trinity and Matrix" is selected for publication by the writer Marco Vichi and published in an anthology entitled “Cuts. 33 Scriptures”.

In 2015 her article entitled “Metaphysics of Singing. Proposal for an Inner Journey to our Spiritual Ground Through Singing” is published in The Voice and Speech Review (VSR), an academic journal for the National Association of Voice and Speech Teachers (VASTA) in the United States.

In the same year, at the 7th International Estill Method Symposium, Rossana successfully presents the results of her research for the achievement of the altered state of consciousness during performance called "The Zone" to trained professionals of EVT ™. She receives the Service Distinction title, and becomes a CCI-TP-SD (Certified Course Instructor with Testing Privileges and Service Distinction).

In December 2015 she officially launches Voce Vera®, a physical and mental training method dedicated to the art of authentic communication.

In November 2016 she resignes from Estill Voice International for ethical and business mission incompatibility.